The latest point release update of Codebook for macOS, version 3.7.4, is mostly a well-rounded bugfix release. However, it includes some new resources for our customers who use the popular Little Snitch network monitoring and defense app.

Little Snitch monitors a Mac’s network connections, and when run in Alert mode it will prompt the user about a new network connection with a handy dialog for approving or denying it, and for creating custom and dynamic firewall rules for the future.

Normally, there’s not much Little Snitch can tell you about a particular process’s intent when attempting to access the network. There’s a lot it can tell you, but little information from the app or process itself. However, if an app is properly code-signed, and includes an Internet Access Policy file, the app can describe the various types of network requests it makes and why. That information is then made available in Little Snitch’s connection alert dialogs. An application can even include links, for instance to helpful documentation!

Here’s an alert from Little Snitch in response to Codebook’s Password Review feature: 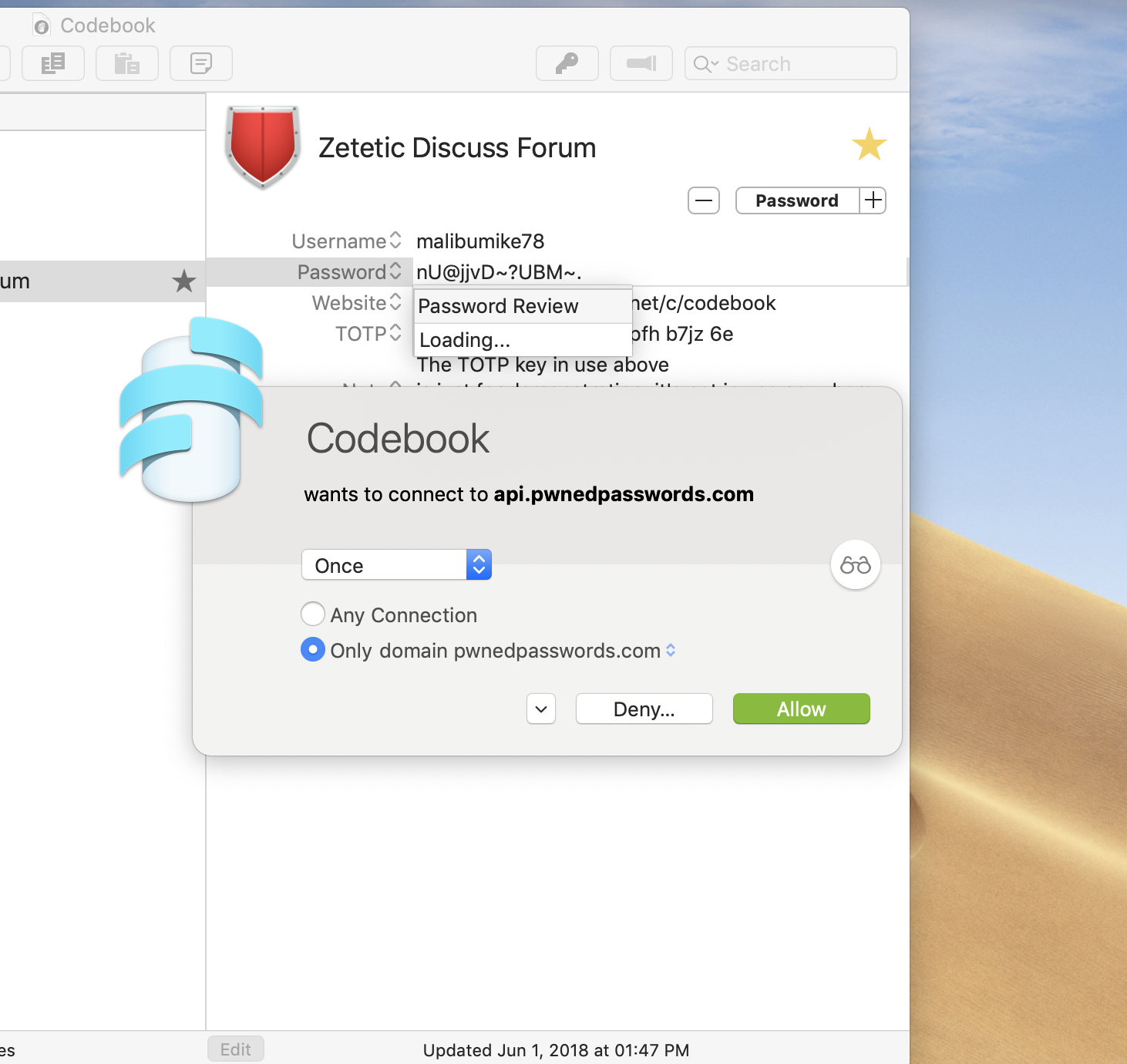 If we click on the bifocals icon to reveal the Research Assistant, we see detailed information about what’s going on, from Codebook: 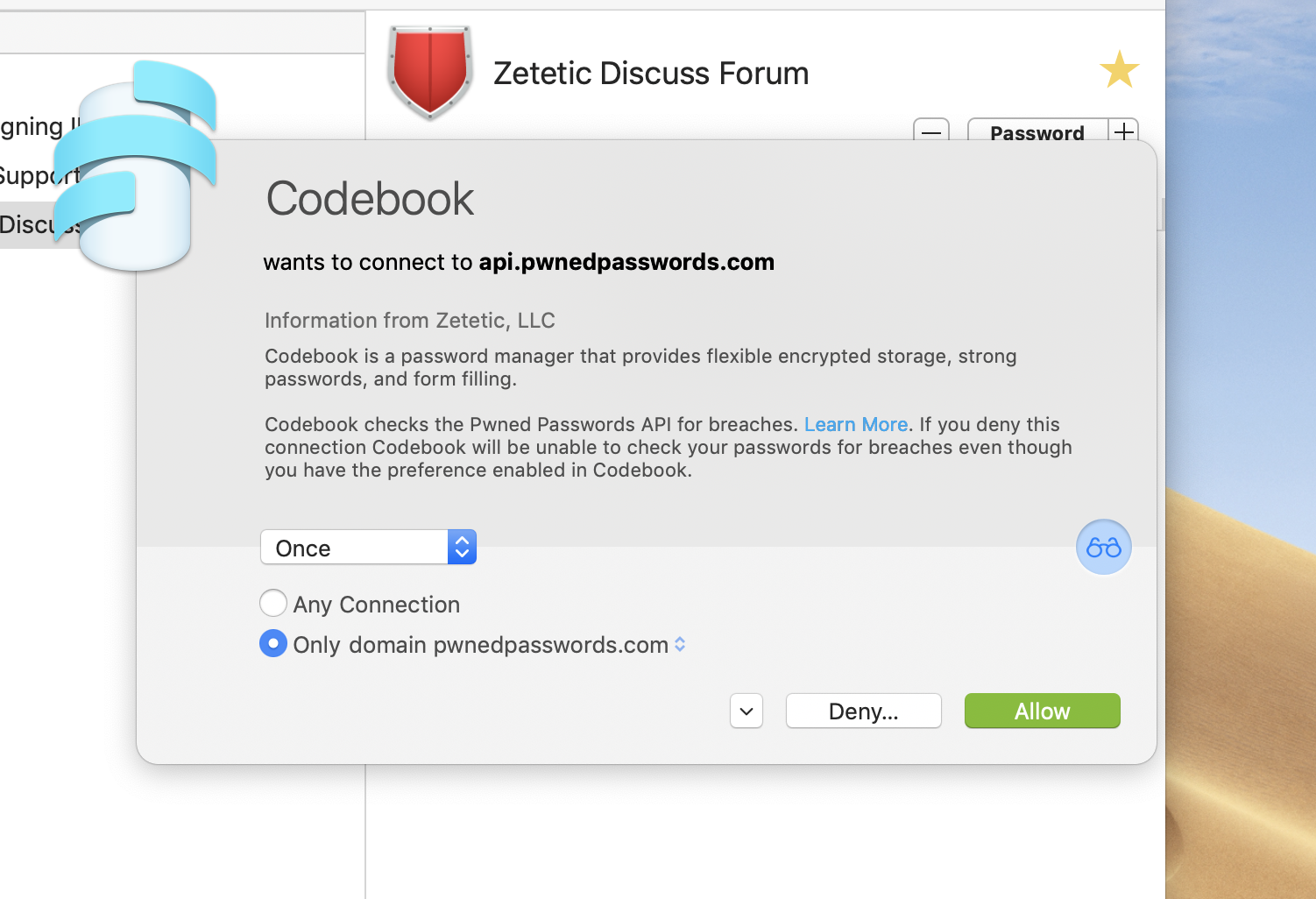 If the user clicks on the Deny button, they are presented with a quick heads-up on what will happen: 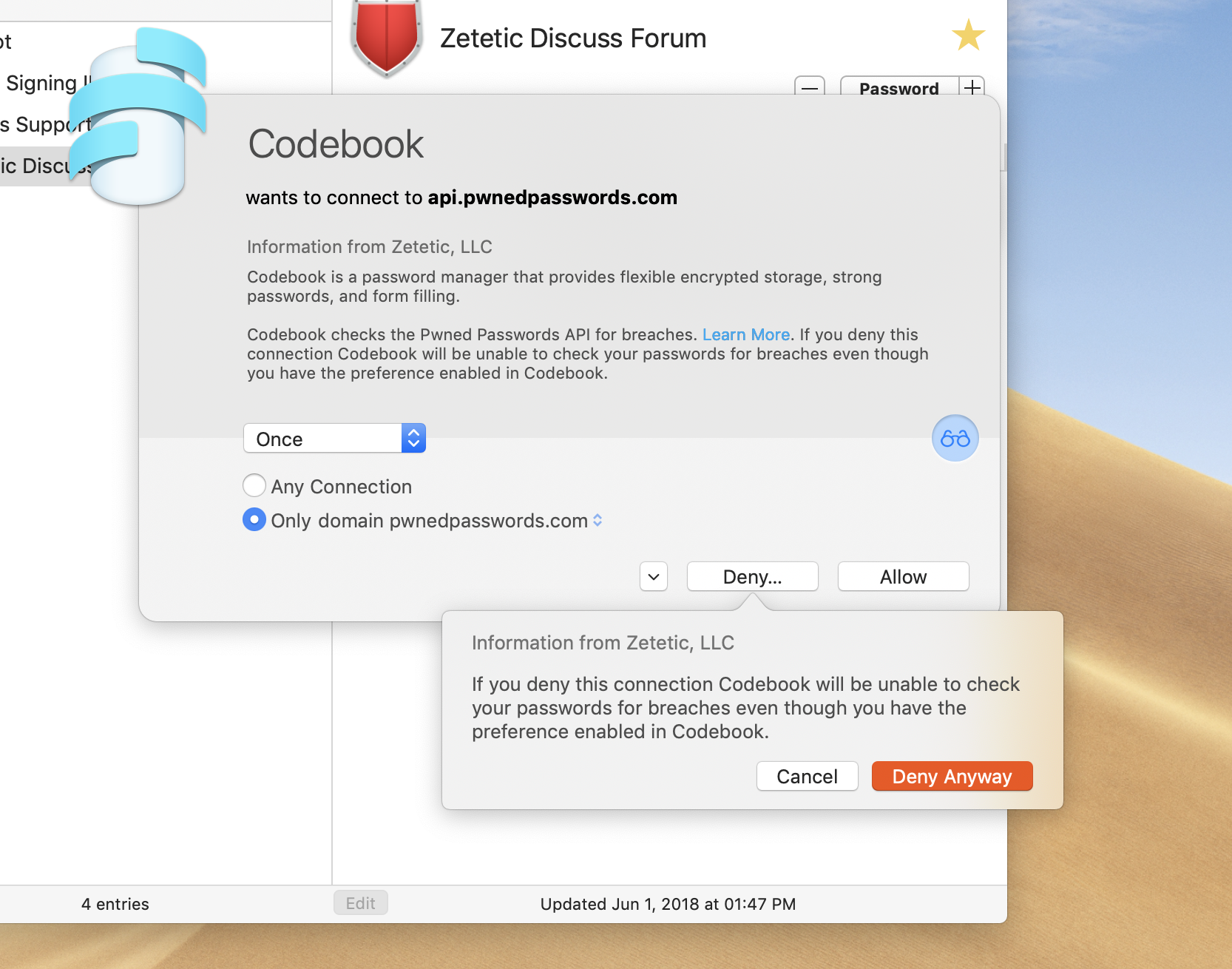 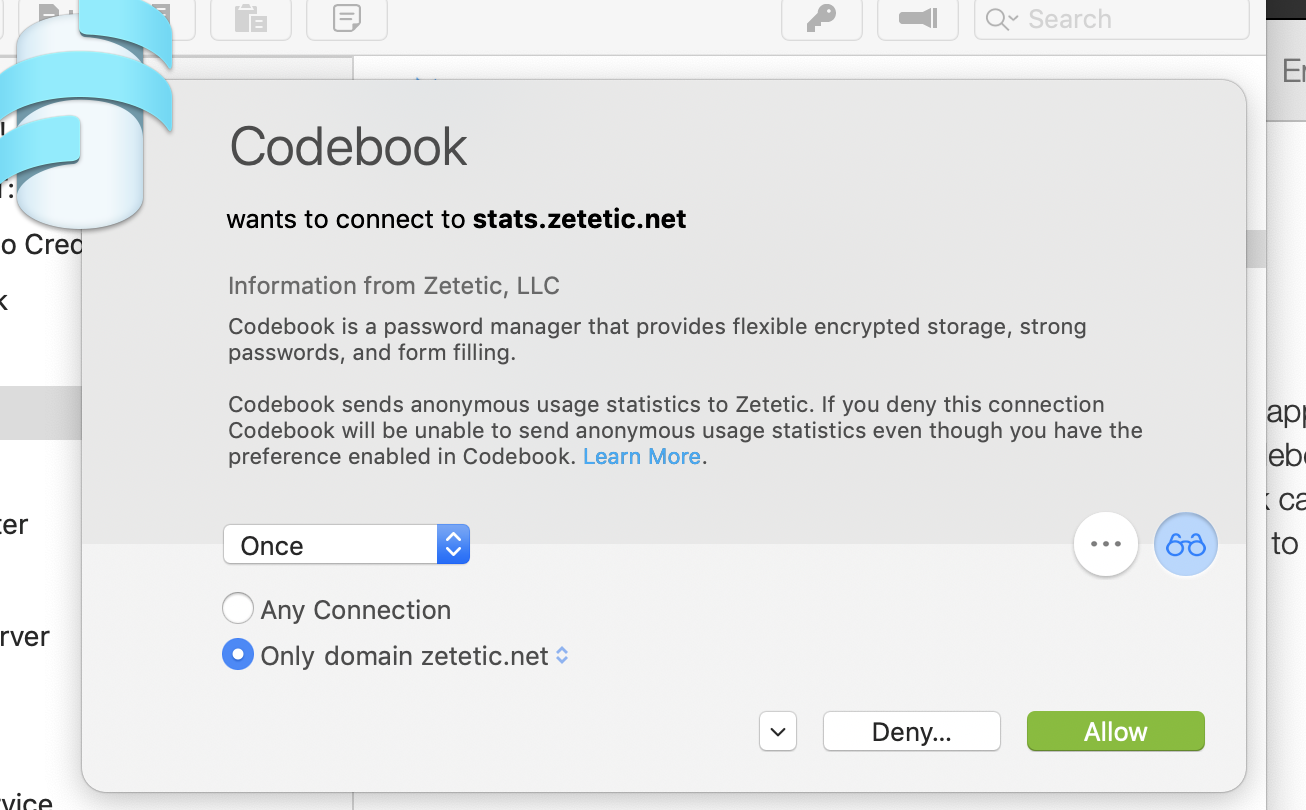 All in all, a simple and handy integration from Objective Development that should be quite useful to those of our customers who also use Little Snitch.

Saying Goodbye to Codebook Lite and Codebook for iPad

Having arrived at the end of a process begun a little while ago now, we’ve removed Codebook Lite and Codebook for iPad from the iTunes App Store. Now there’s only one version of Codebook for iOS available, a universal app for iPhone and iPad that offers a 14-day free trial.

These companion apps served us well over the years. It was more than a decade ago—2008—that we first released our password manager Codebook (then called STRIP) for iOS (then called iPhoneOS) in the App Store. At the time it was stand-alone, only supported iPhone, and required an upfront purchase to download and run (and would stay that way for a long time).

We wanted a way to allow people to try it for free, but In-App Purchases weren’t a thing yet and trials weren’t allowed in the App Store so we did what seemed the next best thing: we created the Lite version as a separate, free-to-download app limited to ten records and no Sync feature.

The Lite approach has its limitations! Offering a clear migration path to the paid version (we did this pretty well I think), difficulty if not outright inability to track conversions from free to paid, and the limitations themselves that prevented the customer from really trying out the app realistically and on more than one platform.

Then there’s the extra work to make sure this second application target is always as up to date as the full version, with every new version of iOS, any bug fixes, and any new features. To be sure, most of the code is shared, but this additional version needed to be maintained and tested and managed in the App Store.

When the iPad arrived on the scene, developers had a choice: build a separate app targeted at the iPad only, or adapt your existing iPhone app to handle both as a universal app. At the time, it seemed like the fastest and easiest way to get Codebook going on the iPad was to go the separate app route.

So now we had a third app, with all the attendant effort required as described before regarding the Lite version! Prior to the modern automation of code signing in Xcode this created some serious challenges to getting everything built and signed properly.

A few years back we began the work of whittling this down. We adapted the main iPhone version to be a universal app supporting iPhone and iPad, and began to let customers of the iPad-only version know that it would be eventually discontinued in favor of the universal version.

Fast-forward a couple years to recent changes in how Apple allows In-App Purchases to be used, and we were finally able to offer a free trial in the main, universal version of Codebook for iOS, and last year we jumped on it.

All this is a long way of saying it feels good to say goodbye to Codebook Lite and Codebook for iPad: we’ve come a long way with Codebook for iOS! And we’re in great shape for what’s to come. All of us here at Zetetic have been working hard on Codebook 4, now the primary focus of Codebook development. It’s a big upgrade to Codebook’s security and sync features, so we’ll be doing extensive testing, and looking for more beta testers. If you’d like to become a beta tester and help us make sure we’ve got Codebook 4 just right, please email us at support@zetetic.net and let us know!

The scope of the vulnerability is such that it could be used to exploit applications that:

Due to the potential severity of this issue, we strongly recommend that all applications upgrade to SQLCipher 4.0.1, especially if they meet the aforementioned criteria.

As with the recent SQLCipher 4.0.0 release, 4.0.1 contains changes that are not directly compatible with SQLCipher 3.x (or lower). These provide a much higher level of security than previous versions of SQLCipher, however, SQLCipher 4.x will not open older databases by default (i.e. those created by SQLCipher 3.x or lower). To enable backwards-compatibility, applications can easily adjust settings at runtime or migrate older databases:

Please review this additional guidance for detailed upgrade and migration scenarios. We have also published a migration guide for Commercial and Enterprise customers upgrading to SQLCipher 4.x using the SQLite-net API.

We are incredibly excited to announce the much anticipated release of SQLCipher 4. This is a major update that includes new features, improvements, and fixes. Here are some of the most important highlights:

The full list of changes in the release can be found below. Note that changes indicated by a * are high impact and will impact compatibility with prior version of SQLCipher!

SQLCipher for .NET, Xamarin, and Windows

Note: .NET, Windows and Xamarin packages are available exclusively via Commercial Edition packages and under the SQLCipher Enterprise Program.

Many of these changes provide a much higher level of security than previous versions of SQLCipher. However, the new page size of 4096, 256,000 KDF iterations, use of PBKDF2-HMAC-SHA512 and HMAC-SHA512 all modify important database settings. Thus, SQLCipher 4 will not open older databases by default. As always, we have updated our migration feature to streamline the upgrade process. To enable backwards-compatibility, it is possible to adjust settings at runtime or migrate older databases:

Over the coming weeks we will be posting more detailed blog posts that elaborate on specific features and improvements that have been made with the latest SQLCipher release.

Codebook Lite was originally introduced alongside Codebook to allow users a free option to try Codebook for iOS before they purchased. Now with the release of Codebook 3.6.0 we’ve introduced a 14-Day Free Trial option within Codebook. Because this functionality is now built into Codebook, we’re planning on discontinuing Codebook Lite development, so we can focus all our ongoing efforts on standard Codebook.

Similarly, standard Codebook has been a universal app (which works on both iPhone and iPad) now for a while and we’ve been phasing out Codebook for iPad (Legacy) for about a year, so we’re planning on pulling the plug at the same time as Codebook Lite.

Codebook Lite and Codebook for iPad Legacy will be fully removed from the App Store on January 1st, 2019. Please make sure to migrate your data to Codebook prior to this date or data loss could occur.