STRIP 2.2.0 for iOS and Android Released

We just released STRIP 2.2.0 in the iTunes App Store and the Google Play store for Android. The iPhone and iPad versions feature a new interface adapted to iOS 7, and both iOS and Android versions bring various bug-fixes, stability improvements, and minor feature updates and adjustments. We're quite curious to hear what our customers have to say about the new look, so we'll spare you the screenshots and ask that you go check it out and tell us what you think.

Note: Amazon 2.2.0 version update may take a little while to appear in the Amazon App Store for Android, if it's not available now please check again later.

We are happy to announce the immediate availability of new SQLCipher Commercial Edition packages for Windows Phone 8 and Windows Runtime 8/8.1. Over the past year, interest and adoption of these platforms has increased dramatically, and SQLCipher is now able to provide a quick and easy way to secure application data. This is particularly exciting because SQLCipher libraries now offer a common, interoperable, secure database solution across major mobile, tablet, and desktop platforms.

The new SQLCipher libraries integrate seamlessly within Visual Studio. The client API based is on the popular sqlite-net library that provides a compact ORM and both synchronous and asynchronous interfaces. As with other integrations, applications use the high level API to manipulate data using the ORM and/or SQL, while SQLCipher works behind the scenes to manage all aspects of security, including key derivation and on-the-fly encryption and decryption of the database pages. 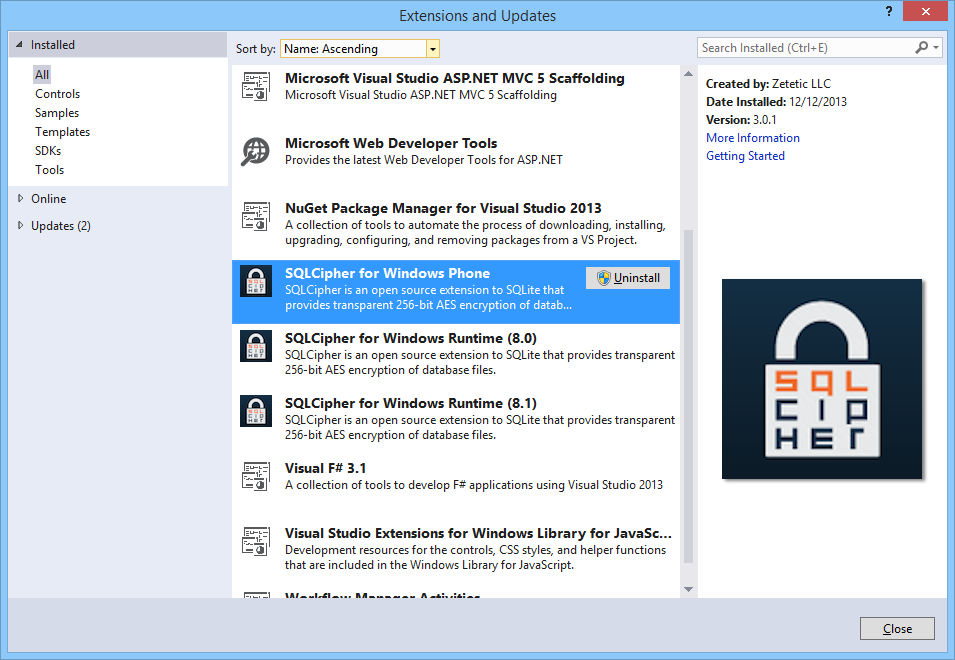 This architecture supports rapid implementation on both platforms, and applications that already use SQLite on Windows Phone or Windows Runtime can be converted to SQLCipher in as little as a few hours. Application using these new SQLCipher libraries for Windows Runtime can easily inter-operate and access SQLCipher databases generated on other platforms, including iOS, Android, and Windows Desktop. Furthermore, both packages include CipherCare Plus, providing prioritized and confidential email support directly from the SQLCipher development team to help integrators get up and running quickly.

SQLCipher for Windows Phone 8 and Windows Runtime are based on the latest version of SQLCipher 3, and take advantage of many of the newest features. For example, porting SQLCipher to run on Windows Phone 8 and Windows Runtime introduced some unique challenges. On some other platforms, SQLCipher relies on OpenSSL for underlying cryptographic operations, however, it is not easily supported on either Windows Phone 8 or Windows Runtime. Thus, the new packages take advantage of SQLCipher's pluggable crypto providers, allowing the use of LibTomCrypt's AES implementation and the Fortuna PRNG. Particular care is taken to seed the PRNG entropy pool with a rich, externally sourced cryptographically secure random data block, which is feed into the the crypto provider using the new PRAGMA cipher_add_random. Finally, databases created using SQLCipher benefit from strong default key derivation using 64,000 iterations of PBKDF2 to protect against brute force and dictionary based attacks.

SQLCipher continues to support critical application developer requirements for easy to use data storage security. If you are interested in using SQLCipher on Windows Phone 8 or Windows Runtime, please checkout our Commercial Edition page to order now or request a trial. If you have any questions reach out to us and we'd glad to help!

Since a lot of our customers are buying new devices this time of year and inquiring about discounts for STRIP (as well as being kind enough to tell their friends about our password manager), we figured it's time to do a sale. Starting this evening until New Year's Day 2014, all versions of STRIP are on sale at 40% discount. That's Windows, OS X, Android, iPhone and iPad. That's a big discount!

Just visit the store links, you'll see STRIP for Android, iPhone and iPad are all available now for only $2.99:

STRIP for Windows and STRIP for OS X can be purchased at 40% off ($6! A bowl of delicious Pho!) using the coupon code STRIPHOLIDAY2013. Visit the links below to purchase either app with the discount applied:

Sorry, this discount is no longer available.

STRIP for OS X is also available in the Mac App Store at 40% off.

Have a colleague, friend or family member using the same password for everything? Someone who wants a rock-solid password manager that's tried and true? Please forward this discount to whomever you like, it's good until New Year's Day.

This Monday night, December 16th 10pm EST, Tempo and other web systems will be temporarily unavailable while we perform critical patch updates to ensure the stability of our services.

This release contains a fix for the PRAGMA cipher_migrate feature we added with the 3.0.0 release. A migration issue existed when a passphrase that was longer than 64 characters, or a raw hex key was provided which caused a failure during migration. In addition to the bug fix, we've added a new PRAGMA called cipher_add_random that allows one to add externally sourced entropy to the entropy pool of your configured crypto provider. Currently there is support for this via the OpenSSL and libtomcrypt providers. The format must be provided as blob literal containing a hex sequence. An example would look like this:

Please take a look at the 3.0.1 release and let us know if you have any questions or feedback.