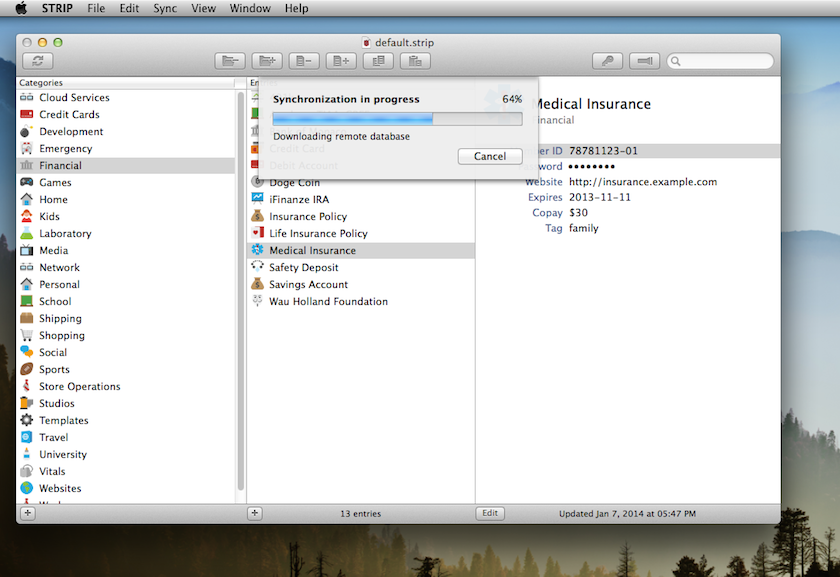 We're very excited to announce the immediate availability of STRIP 2.4.0, along with a major new feature for OS X and Windows called Secret Agent. STRIP's Secret Agent adds a convenient way to quickly access your STRIP data from other Desktop applications. Today’s update also includes redesigned and new icons along with various bug fixes. Read on for more information!

With a quick keyboard command you can now quickly and easily access your sensitive STRIP data for use in other applications on your Mac or Windows computer without having to switch apps, interrupt your flow, or copy and paste values.

Secret Agent operates in the background on your computer, so it's available anytime. Once you’ve enabled Secret Agent in STRIP Preferences you can type a global hotkey command at any time to bring STRIP up from any application.

When you want to insert secure data into an active text field, for instance entering a website password into your favorite browser, press the hotkey and Secret Agent's search interface will appear, allowing you to quickly locate the record and field you need.

Start with your cursor focused on an active text field in any application. Type Shift + Control + Backslash on Windows or Shift + Command + Backslash on OS X to bring up the Secret Agent interface. If STRIP isn’t currently unlocked you’ll see a login prompt. Once you’re at the search bar just start typing what you’re looking for: 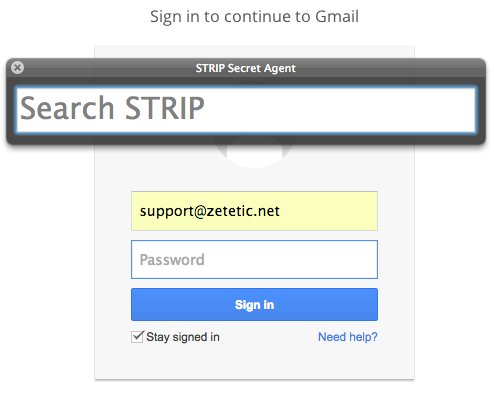 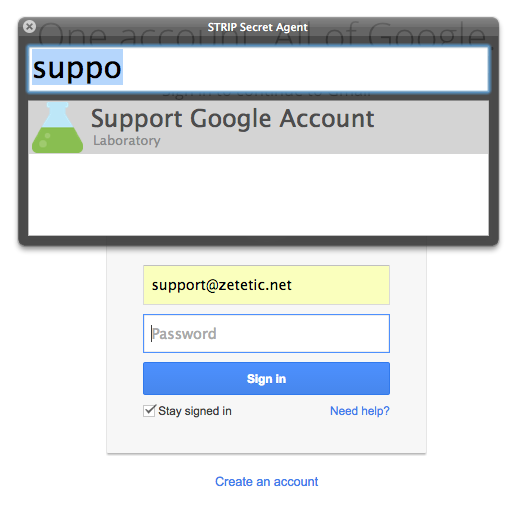 Once you locate the record you need, hit the enter key to bring up its detail view. Use the up and down arrow keys to navigate through the search results (or scroll and use your mouse, as you like.) While looking at the record detail in Secret Agent, arrow up or down to the field you want, then hit the enter key to automatically insert the field contents at the cursor location in the target application. Pressing the key combo again will bring the same record back up, making it easy to fill in multiple fields. 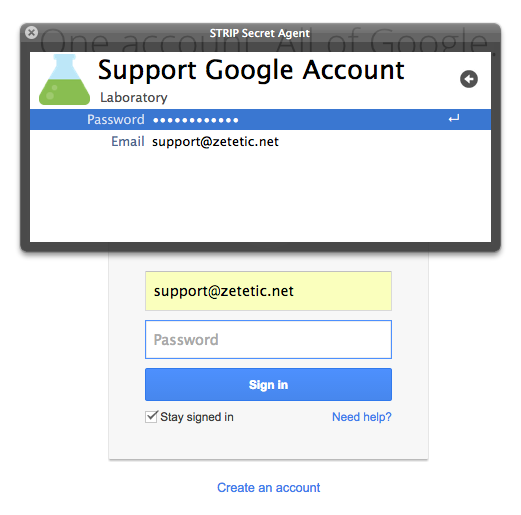 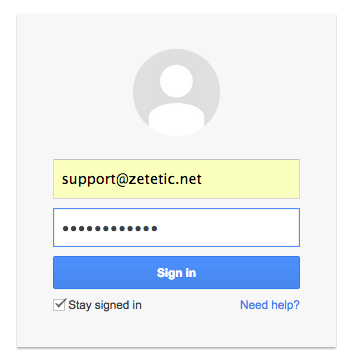 Secret Agent is a really fantastic and helpful addition to STRIP, providing easy access to data from any application. It's fast, keyboard driven, and most importantly, unlike some browser plugins or javascript-based integrations, Secret Agent is under your complete control. This minimizes concerns about malicious sites or applications stealing your data.

One of the nicest visual improvements to the latest version of STRIP is the icons available to help you identify your categories and entries. We partnered with Jory Raphael at Sensible World design studio to completely redesign STRIP's entire icon collection, including the additon of sixty new icons created to our specifications. We couldn't be happier; they really make the app a pleasure to use. (Jory also designed the custom toolbar icons you see in STRIP for OS X and Windows!)

Please let us know if you have any questions about the upgrade process, how you like the new version, or if you run into any issues. We just launched a new community forum for STRIP at discuss.zetetic.net for discussion about the software. If you have a question or feedback about STRIP, please stop by, or send us an email to support@zetetic.net.

If we've taken a little bit longer than usual to get back to you in the last week, it's because we had the great pleasure of attending PasswordsCon 14 in Las Vegas (and got into BSidesLV as well). Stephen and I presented "Enhancing Password Based Key Derivation Techniques" which focuses on two experimental developments in SQLCipher: adaptive key derivation and using hardware tokens. Billy presented "Password Generators & Extended Character Set Passwords," which was mostly an argument that it's time we started generating and using Unicode passwords.

There's an engaging sense of community at both of these conferences, and we had some really fun and interesting conversations with both the attendees and organizers. We would like to thank both Per Thorsheim and Jeremi Gosney, there is a lot of work involved in putting on a conference like this and they did an excellent job. Please find the slides to our presentations below, and don't hesitate to reach out if you have any questions or comments.

While cranking out the updates for the 2.3 series of STRIP over the last few weeks (2.3.2 for iOS was just submitted to Apple this afternoon,) we've been hard at work on 2.4 for Windows and OS X, building a new feature we're really excited about. Want to help us test it, get early access to The New Thing™, find bugs, recommend improvements? We're on a tight schedule so we're hoping to find customers who are able give it some thorough use over the next couple of weeks and review the new feature. If that sounds like you, please write us! support@zetetic.net.

Today we're releasing an update to STRIP for OS X that fixes several bugs that could cause data to be lost if not explicitly saved and a crash where a field had been left in an editing state when the application locks due to inactivity. We've done a lot of testing of this update and with the help of a number of customers who wrote us about the problem and helped us test it's ready to rock.

If you bought STRIP from the Mac App Store, click the badge below, and the "View in Mac App Store" button if not prompted by your browser, an update should be available in the App Store app: