This morning we've released STRIP 2.1.0 for all versions of STRIP in the various App Stores and made it available via auto-update in the desktop apps. This version of STRIP includes a major security upgrade and is not backwards compatible or sync compatible with earlier versions of STRIP. Thus, you should be prepared to upgrade all copies, and please back up your data before proceeding.

Instructions for updating each STRIP are available on our FAQ.

Detailed notes about the differences are available in the original SQLCipher 3 beta announcement post.

It's important to note that these key derivation changes enable a much higher level of security than previous versions though, by default, SQLCipher 3 will not open older database. To enable backwards-compatibility, it is possible to adjust settings at runtime or migrate older databases:

Finally, as a result of the increased key derivation count, users may notice that opening and keying a database takes longer in SQLCipher 3 than with previous release. Noticeable performance issues can almost always be avoided by ensuring that applications do not frequently open and close connections. That said, while we strongly recommend using the new default KDF settings, it is possible to set the default back to 4,000 iterations before any databases are open by calling the global PRAGMA cipher_default_kdf_iter = 4000; before invoking the SQLCipher library.

The latest source code can be found in the official project repository, and SQLCipher Commercial Edition libraries are already available in the SQLCipher Store. Commercial edition customers with CipherCare may contact us with their original order number for details on how to download an update.

Please take a look, try out the new library changes, and let us know if you have any feedback. Thanks!

STRIP is our password manager—we put a lot of love and work into it, we want it to be as secure and easy to use as possible, we really want it to be the best password manager out there. But we don't usually publish our long-term plans because we like to set our own timelines and we don't want to over-promise and under-deliver. STRIP is a pretty big project, involving four native applications that sync together, so our planning process is quite careful and iterative. This can give the impression that we're moving slowly when we're actually doing a ton of work behind the scenes. Since folks are asking a lot lately, we'd like to tell you about the next version of STRIP, and provide some insight on where we're going from here.

The next, soon to be released version of STRIP for all platforms is version 2.1.0. We've been testing it all summer alongside a major update to our encryption engine SQLCipher. We're preparing the iOS and Mac versions for app store review now and hope to release all versions simultaneously (including Windows and Android) as soon as we're approved for release. This version will be available for free to upgrading customers.

This change to your encrypted database is an enormous gain in security at a time when powerful, well-funded organizations as well as individuals and researchers are developing sophisticated means for attacking encryption systems, and in particular brute-forcing passwords. With computing power increasing rapidly it is time to make attacks on STRIP's encryption literally more expensive, massively so.

Some additional things to note about the iOS and OS X versions:

We had to drop support for iOS 4.3 finally, because CommonCrypto hardware acceleration support is not available to us there, and it's absolutely necessary due to the increase in PBKDF2 iterations on the database key. Hopefully anybody still running 4.3 out there has the ability to upgrade to the latest iOS. We realize that's not everybody, but numbers suggest there are very few folks in that position, and we do have a contingency plan for anyone who does (if that description fits you, please get in touch with us soon.)

It's important that you upgrade to 2.1

Device and sync compatibility are really important to us and minimizing disruption is best for our customers. In STRIP 2.2 we won't be changing the database format again, but we may start changing the minimum supported OS versions of the various apps as we seek to improve them and take advantage of new APIs. This means that STRIP 2.1 running on older devices that either can't upgrade STRIP to 2.2 or can't upgrade to the latest version of their OS in order to upgrade will remain sync-compatible with STRIP 2.2, allowing us to proceed with needed enhancements without leaving customers on 2.1 out in the cold.

That's why we think you should upgrade as soon as possible, once STRIP 2.1 is released. We've been testing this upgrade for many months to make sure we've got it right, and we'll be standing by to help if there are any issues.

STRIP for iPhone and iPad version 2.2

STRIP for iPhone and STRIP for iPad are going to get face-lifts for iOS 7, we're working on them now and we think you're really going to enjoy the change, it's already a pleasure for us as we work on it, make changes, and test. Here's a sneak peak at the Sync screen in progress: 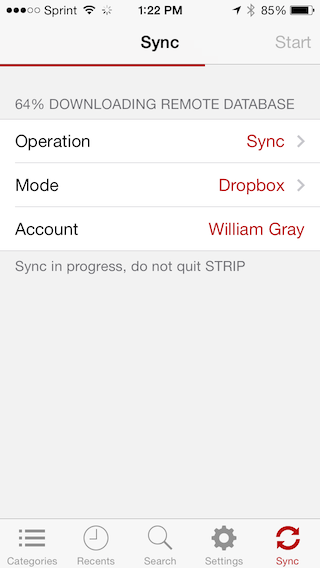 Work in progress, not final by any means

We're revisiting all of our interfaces as we go over them, to see if we can do a better job, and that was certainly the case for the Sync view. I always wanted to provide better indicators of current sync status. Not only is it a pleasure to watch the red-tinted progress bar zoom across the screen, this will be a big help when debugging issues with our customers by providing them with more information.

This version will also be available for free to upgrading customers.

These are not easy problems to solve well and we want to make sure we get it right in the experience department, in making STRIP as easy to use as possible while providing these great new features. On top of that, we need to make sure we maintain and improve the high level of security and diligence our customers have hopefully come to expect from us. Putting aside the interface changes, what we need is a new sync system. We think solving these problems together is critical to providing the best version of STRIP yet, and work is already underway. We call it STRIP 3 and it's pretty much where we've always wanted to take the app, ever since we launched as a stand-alone app on the iPhone.

Want to help us make STRIP better? Please consider joining our beta testing program. We're looking for testers who are excited to run the latest betas as we go forward, test with (backed up) real-world data, and provide lots of feedback. If that sounds like you, please get in touch!

This is a quick post about STRIP, our password manager, and how you can use it to make life a little easier. Say you have a Foo Web Services account and you run virtual machine instances there—you'd typically store three pieces of information in STRIP so that you can log into the console and access your instances:

Thus when you need to log in, you can just pull up STRIP, start typing the record name, quickly copy the password and then double click on the URL to launch it in your browser to get going: 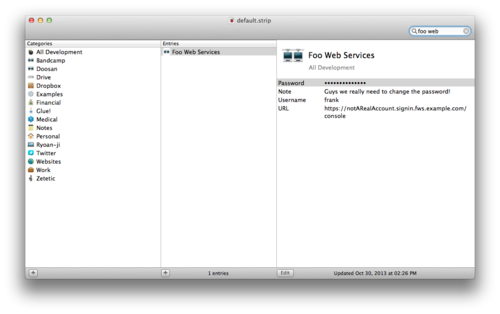 Okay, nothing new there, right? But maybe the reason you're logging in to the Foo Web Services console is because you need to get the DNS names for your virtual machine instances so you can log in to one or more of those servers via SSH. Now it's a nuisance, now you have to copy each URL out of the web interface and into your Terminal.

But STRIP can take care of this for you, cutting out the step to your web console, by using URL fields. Let's create a new label just to make clear what's going on here by going to the File menu and selecting Customize Labels, which produces a sheet showing all your labels in STRIP: 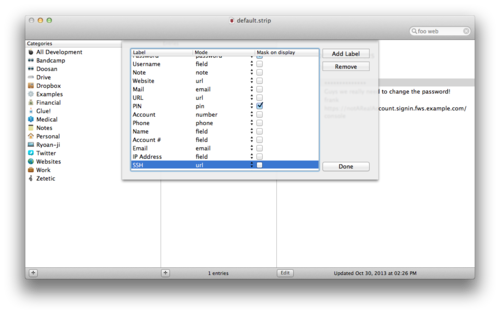 Create a new label, name it SSH for now, and set the Mode to "url," then click Done to dismiss the Customize Labels sheet.

In our Foo Web Services record we'll add a new field for each of our virtual machine instances, setting the label to SSH for each. If we use the SSH URL connection string format in the field itself, ssh://user:password@hostname:port, we'll be able to double-click these fields to launch SSH connections in Terminal (or the preferred SSH app/client on your computer/device). In the following screen, I've added two such SSH urls:

Now when I double-click these fields on the record in STRIP my operating system offers to launch to launch Terminal for me (with a warning, I should add): 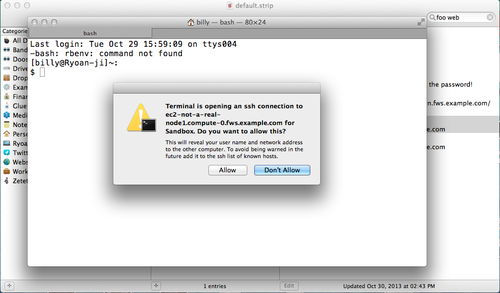 After I click Allow, a new Terminal window launches and fires up an SSH connection so I can do whatever I normally do to verify my identity (password login, public key, etc).

This also works on iOS or Android if you have an SSH client installed. Simply tap on the URL fields in STRIP for iOS or Android to get the option to launch the URL in your preferred SSH app: 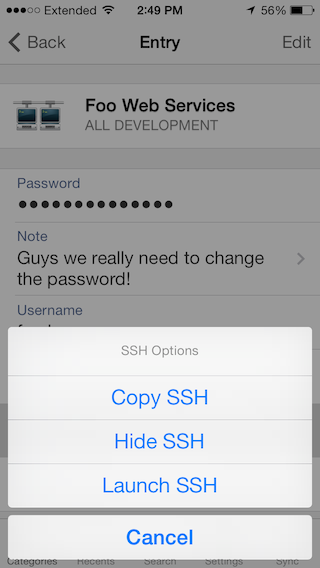 (Yes, that's a sneak preview of the iOS 7 interface, don't hold us to it, work in progess!)

When I tap on Launch SSH, iOS opens up an app on my device that's registered for handling ssh: connections, in this case it's good old TouchTerm: 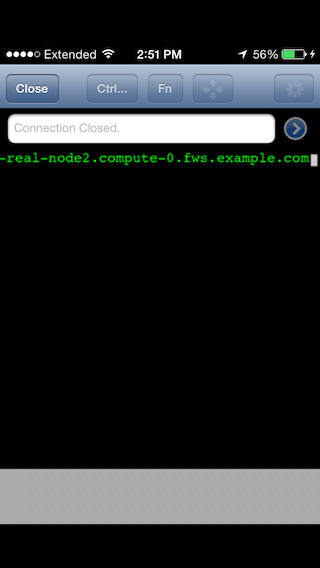 As you can see, TouchTerm attempts to open the connection with the details supplied in the URL string (and in the case of example.com, gives up for good reason).

Creating labels with a mode of url is a powerful way to make it easy for you top pop into STRIP and fire up a connection to a system that requires credentials you've stored in STRIP.

Off-topic: have a favorite SSH client for iOS or Android that we should check out? Feel free to leave comments!

We've become aware of a compatibility issue with STRIP running on iOS 7 that is affecting users who switch between the numeric and text keyboards during login. The problem occurs when toggling between the "abc" and "123" modes while the Mask on. When switching between keyboard modes with the application switch, the contents of the password entry box is cleared. If you don't realize that the password box has been cleared, this have the appearance of being unable to log in following on iOS 7. 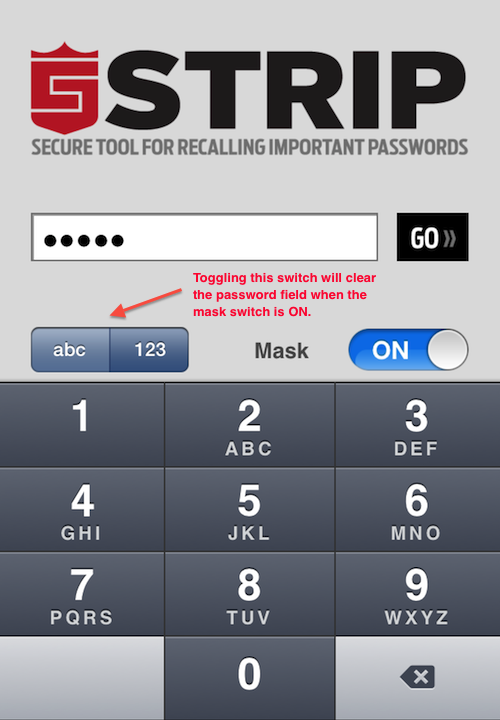 For example, with a mixed password of "6789abcd", one might start off in the numeric entry mode to enter the first part of the password. However, under iOS 7, if one were to tap the "abc" toggle to switch into the standard keyboard mode to enter the remainder of the password, the contents of the password field would be cleared, removing the 6789 from the password text field. A user who didn't notice this could continue entering text, but only "abcd" would be passed into STRIP, resulting in an incorrect password error.

The good news is that there are two simple workarounds for this issue that will allow you to log into STRIP:

We are treating this as a high priority issue and will make sure there is a fix for this issue in the next release of STRIP. Please contact us at support@zetetic.net if you have any questions or other issues.